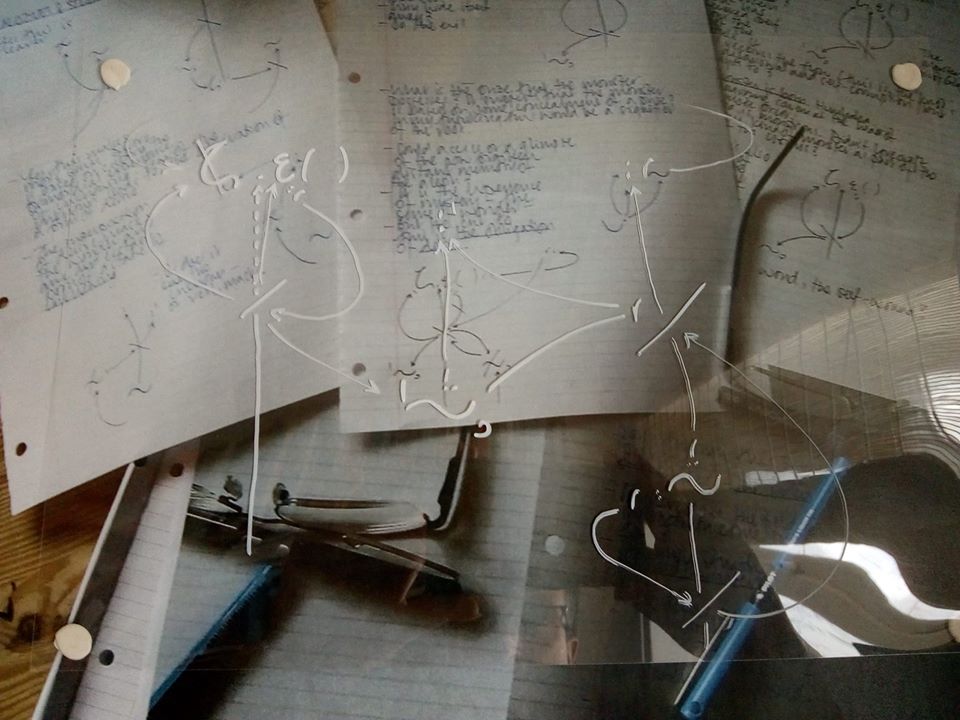 Published by Nadim Bakhshov on December 30, 2018

Karl: Can we try and pull together material for this first reflective essay. It’s only 2000 words, so not very long.

Nadim: Okay. I agree. Let’s pull together some structure and approach and decide how we are going to think about it.

Karl: First question we must seriously consider answering is the style of writing we will use. Now, it seems you, Nadim, carry out all of your thinking in dialogue with a participating interlocutor. But we need to discuss this carefully. If Bakhtin’s claim, that all language is dialogic, is true, does it follow that your use of a dialogue to present a piece of non-fictional writing is justified? That’s my first question. And I ask it because we cannot simply quote Bakhtin and rely on his use of language as dialogue as then say that justifies the use of having a dialogue format to present your reflection thoughts. Surely, you have to have some further justification?

Nadim: I think you’re right. Dialogue, as a style, has dropped out of sight, in most presentations, essays, etc.

Karl: Yes, but you wrote a Platonic dialogue – which you published. So, we can’t dismiss the question that easily.

Nadim: I’m not trying to dismiss. I am seeking justification. I know that the most effective form of my own thinking is dialogic. Having a second voice present helps enormously articulate a point and, at the same time, challenge it. Yes, I see that this simulates both sides of what most people assume. But that’s not really important here. What is perhaps the key idea is the difference between monologic presentation and dialogic presentation.

Karl: “simulates both sides of what most people assume”? What does that mean?

Nadim: Most written works either inscribe the ‘other’ in their text – as an ‘audience’, a ‘listener’ to the narrative, or storyteller, etc. My issue has been that the ‘other’ is not given. Unless you write in a very constrained environment, where your ‘other’ is partially visible as a member of a shared community –

Karl: In academic circles, surely this shared culture removes the requirement to inscribe the other in the text? The ‘other’ is inscribed through the shared community in which the monologic utterance is taking place?

Nadim: Well, that’s a good reason to stick to current models of writing. But there is a problem. I remain unconvinced that the best form of writing and helping to define a ‘voice’ is monologic – it is simply a single voice talking, or broadcasting. That seems flawed to me. I’d much rather say that dialogic presentation – which is what I am actually concerned – rather than dialogic thinking, which I do anyway, needs focus and attention. I find myself thinking of Saramago, of Plato – but non-fiction?

Karl: Can you formulate a reading of Derrida – to argue that dialogic presentation of writing is denigrated as a purely prejudicial approach to writing?

Nadim: Can I not argue that dialogic writing also dramatises – through the exchange of voices, the tensions and antagonisms of certain viewpoints?

Karl: The key risk is the ‘tangent’ to the main argument. Typically, monologic presentations follow a linear structure and so become easier to present certain styles of argument. How do dialogic approaches help?

Nadim: They allow some greater rhythmic and literary flexibility of the points being made. Having two people explore the topic rather than one person simply articulating it highlight the gaps, uncertainties, misunderstandings and so on.

Karl: You just made me think of Descartes and his desire for clear articulation.

Nadim: That then made me think of the idea of a dialogue as situating a voice – within a space in which an other is co-present and able to interact with the main voice. What does this do to writing?

Karl: Bring it to life?

Nadim: Write a reflective account of ‘my story’ to explain how I have come to the point of embarking on a professional doctorate. Let’s start there. The first thought I have is that this question presupposes that a single coherent narrative can be organised which shows this – actually, do I mean that, or do I mean that a narrative will organise one’s life, excluding certain elements while privileging others. Does a narrative construction actually reveal the contexts in which I find myself embarking on doctorate?

Karl: So there are questions here of narrative and its applicability to the current setting.

Nadim: So, we start with my first crisis – use James Joyce’s ‘epiphany’ and connect it to the end of Portrait and the quote about ‘forge from the smithy of my soul’. But then suggest that the best model for the narrative is Badiou’s concept of the emergence of a subject as one remains true to the event. Use Hallward, Ethics and Being and Event – to help articulate the picture. But then add in what the epiphany was all about – a mathematics for the human sciences – can I find the Jung quote or the Lacanian rationale behind using mathemes. Then turn to Lacan as a model of reflexive identity formation and a new concept that uses a new notation to present the reflexive arc in developing an identity. Detail out the the mechanics. This leads, as always to a renaissance of the ancient value of metaphysics – as a way of ‘grounding’ the individual subject, society, etc. and the Schelling turn to myth and his use of Boehme (credited with the contributing to the development of the unconscious) – and the idea in existential thought that existence precedes essence (Sartre, Existentialism and Humanism, Being and Nothingness) and the Whiteheadian idea of an ‘adventure’. This brings in the Rortian book ‘linguistic turn’ and the idea of developing a new syntax and grammar of thought by extending natural language. The most relevant formulation is one based on the problematic ‘mirror stage’ by Lacan. I should briefly articulate my adaptation and what it says about identity formation. Then, running in parallel with all of this, is the economic narrative, of earning enough to study – memories of reading Goethe, Chekhov and Freud on the train to Ealing for a ‘Call Centre’ job, of going abroad to live in Greece to write and do minimal amount of work – finished first manuscript, met my wife. Of travelling to Italy to allow ‘life’ to come into play, working and getting married and discovering Dante in Florence. Then, of a slow return to being paid more – coming back for MSc study, another degree: philosophy and then working as a software engineer before having first child, then wanting more time – moving back into education to teach – day job: learning and developing craft and management of pedagogy in a Further Education College – which led to conflict with philosophical project: and crisis at work, took 6 weeks sick leave, completed a manuscript and it was accepted for publication – on the educational implications of this philosophical work. This led to a sideway step, loss of income and coming into university as a ‘teaching fellow’, which opened up space and time to work harder, earn and remain closer to my philosophical project. This is where the doctorate appeared as a path of presentation and development in drawing further educational consequences of this work. Finish using Badiou’s model and the ongoing difficulties. That there is no guarantee that I have the talent to present this work – as it is radically new – the symbolic grammar and syntax – a form of conceptual-syntax – is both, in its conception and its presentation, unprecedented. And the implications for reconfiguring the sciences, the nature of knowledge, the relative priorities of the natural to human sciences, the development of new methodological practices that draw human constructivity into work and so on. I am not at all certain I can articulate it for a specific audience, nor am I certain I can pause from its development to do so. There are huge challenges which I face.

Nadim: Happy to work with that. But what about the professionalism one? I want to look at the meta-disciplinary questions that my work has opened up: the organisation concepts behind the modern university, the development of specialisms, the different forms of knowledge and the alternative activities of a university. These are metaphilosophical questions – then I have to add the amateur versus professional debate – Spinoza, for example and the Sokal affair and what they say about the institutionalisation of the professional philosopher. The model of professionalism should be discussed using the book about the trends in institutional life – SChmidt’s book, for example. Can thought and the requisite freedom (Deleuze’s ‘What is Philosophy?’ would be good to use here) actually survive its professionalisation? In other disciplinary areas, which might have a given body of established knowledge professionalism might mean something else. So I am working on my professional identity as a philosopher? A philosopher of education? Meta-educational issues.